A new design for a mass decontamination facility: Efficient ways of assisting large numbers of victims of a bioterror attack.

Using a unique hexagonal architecture, a close-packing of rooms is achieved. Moreover, the 120 degree angles where room edges meet facilitates the use of turnstiles to ensure a one-way flow of persons through the facility.

A first group of six persons enters through a first turnstile into a hexagonal shaped clothing bagging room where each person must remove all clothing, and cannot leave the bagging area until being completely free of clothing, jewellery, personal effects, or other materials that could interfere with complete decon or could harbour contamination or chemical agents.

Persons then enter an examination/vaccination room.

These three hexagonal rooms (stripdown, washdown, examination) are replicated: three rooms for men, and another three rooms for women. The hexagonal packing of these six rooms optimizes space usage, and also ensures high throughput since no corner turns more than 120 degrees. Moreover, all six rooms are built around a seventh triage observation area, for triage staff or remote video monitoring equipment. The remote observation facilitates telemedicine as well as the remote operation of passage locks and plumbing valve controls.

In the event that persons are suspected of having come into contact with biological agents, such as anthrax, it may be necessary to evacuate thousands of persons to a hospital or decontamination facility for Post Exposure Prophylaxis (PEP).

This paper describes a new kind of facility that could be installed into the central emergency receiving room of hospitals, the central customs and immigration area of airports, and other plenary areas of large facilities throughout the country.

This assumes the three steps:

each take place in the same section of the facility.

However, by having stages, where victims move through a decontamination line, with pipelining, it is possible then to decontaminate persons at a rate of 30 seconds/person = 120 persons/hour throughput. It still takes 90 seconds to process each person, but in steady state conditions, persons enter the decon line every 30 seconds, and persons emerge every 30 seconds, so the THROUGHPUT is three times as much.

With parallelism in addition to pipelining, a further increase can be obtained. Suppose, for example, that each stage of the pipeline can accomodate six persons at a time (e.g. a six station stripdown room, six station shower, and six station examination/drying/dressing room).

If privacy were not a problem, the throughput could be increased to 720persons/hour.

However, when six persons enter the stripdown room, shower room, and drying room, together, there is a privacy problem. This problem was solved by having separate decon pipelines for men and women, so that the facility could process 720men/hour and 720women/hour. In addition to solving the privacy problem, having these two separate pipelines resulted in additional parallelism: 720men/hour+720women/hour=1440 persons/hour.

(Follow this link for more details on the two processor three-stage 6-channel pipeline for processing 1440 persons per hour.)

The final design is depicted below:

To see how this floorplan fits into the 80 Spadina Avenue space, follow this link:

A feature of this space-efficient hexagonal packing is that people never need to turn at angles tighter than 120 degrees, so throughput is very high. Also, the 120 degree angles where walls meet facilitates the installation of high security rotogate turnstiles like those used in unguarded automated subway exits. This ensures that no person can flee from the facility without passing through in the proper direction. Moreover, the hexagonal packing of the six rooms creates lost space in the center. This lost space is actually put to good use as a central triage observation room. The walls of this central room are made entirely of smoked lexan so that medical staff in the room can have a clear view of the decontamination procedure taking place in the six rooms around the outside, but, for reasons of security, and to protect the privacy of the victims, persons in the six rooms cannot see into the central triage room. This central triage/observation room also houses computers with telemedicine videoconferencing capability so that remote medical staff can ensure that safety procedures are complied with.

The mass decontamination research and teaching facility is shown in a partially constructed state, so that we can see around it, and understand how it works: 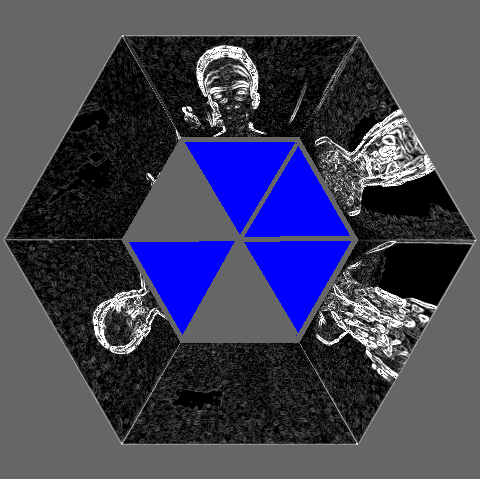 Here we see, for example, the entrance to women's undressing room showing, in yellow tape, where the rotors of a turnstile will go.

Separate entrances for men and women are to be provided. Three of the six rooms are for men, and the other three are for women.

The knobs and soap dishes have been removed from the column shower, and the holes where these items once were have been replaced with a machine vision system comprised of 12 laser diode scanners together with six round lexan viewing windows moulded into the inside of the column. There are two laser diode scanners for each of the infrared sensors that are located at each of the six stations. The system is sealed and completely watertight. Here is a closeup picture of the six round watertight infrared openings of the column shower currently in use in the men's washdown room:

Three of the round smoked lexan sensor openings are visible here. Up to six men can use this shower at the same time, but only the number of stations actually being occupied will consume water. Moreover, water is only consumed when a user is present. Since there are no knobs or controls of any kind, there is no possibility for deliberately destructive acts such as might otherwise happen when users deliberately (or accidentally) leave the water running. Moreover, in a state of anthrax panic, victims need not concern themselves with which way to turn a knob to operate the device. Finally, a central computer monitors the exact amount of water usage, so that the amount of decon solution needed, as well as the amount of waste water runoff that must be contained, can both be calculated. Each of the six nozzles face one side of the hexagonal shaped shower room to maximize space usage and efficiency.

As mentioned earlier, all six of the decon rooms, including the men's shower room shown above, have one wall made entirely of smoked lexan, so that medical triage staff or decontamination officers can supervise the decontamination process. 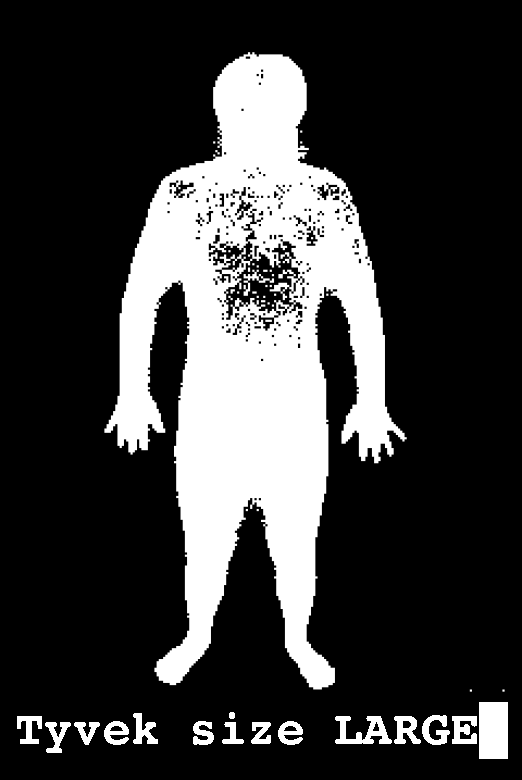 The six television receivers are arranged in the same hexagonal formation.

Six closed circuit television receivers suspended from the ceiling display outputs from each of the six decontamination rooms, as observed from the triage room.

Note also the hexagon made from red tape on the floor has the same physical dimensions as the triage/observation room. The display surface of each of the six television receivers is aligned with and centered along the middle of a corresponding side of the hexagon depicted on the floor in red tape.

Although the television displays shown here are of poor resolution:

(Here is the view from the men's decontamination/triage officer station, during a Decon Drill, held at the 80 Spadina Ave. facility, Thursday July 5th, 2001.)
The telemedicine video links are of very high quality and high resolution, so that remote triage personnel can clearly distinguish, for example, anthrax, from dust or other dirt. Archived images can also be used as evidence in criminal investigations.

Thus high resolution sensors are to be used throughout the facility to ensure satisfactory video quality.

Here is a view of the three rooms on the men's side, as seen, from the top level of the male decontimantion officer's station, where these three easy steps are visible:

These three steps that were practiced in the 2001 July 5th decon drill are visible on the above control panel:

It may be noted that in a real terrorist attack:

See also, the final chapter in Cyborg: Digital Destiny and Human Possibility in the Age of the Wearable Computer