(or Decontaminating and Decontextualizing Deconstructionism)

Decon is short for Decontamination (e.g. stripdown and washdown in response to anthrax scares, etc.), but the term ``decon'' is also a short form for ``deconstruction'' (literary criticism asserting multiple conflicting interpretations of philosophical, political, or social implications rather than an author's intention). This exhibit attempts to demonstrate how we have all become interdependent on technological extensions of the mind and body, and hence, to some degree, have all taken a first step to becoming cyborgs. The exhibit also attempts to show how authorities might view the cyborg being as a threat, therefore requiring that it be stripped of these extensions. The cyborg body, whether by way of a wearable computer, or by pens, pencils, portable data organizers, shoes, clothing, eyeglasses, and other personal effects, is potentially contaminated, and thus requires cleansing.

Foucault described how authorities once used the specter of plague to justify draconian quieting of any civil unrest. Just the mere mention of the word ``plague'' could be used for quarantine or forced mass evacuations. Forced evacuation to mass delousing centers, cleansing stations, or the like, has sometimes been used to remove undesirables from a given area. Even ``ethnic cleansing'' could fall under the domain of decontamination (``decon'').

No reasonable person wishes to sacrifice any of these principles, but it may be necessary to do so in a real incident if lives are to be saved.''

DECONference was conceived as a probe into society, and to understand the culture and technology of mass decontamination. In the exhibit, decontamiation was deconstructed by literally building a futuristic mass decontamination facility, as might form the entrance to a space station or airport of the future, or as an entranceway into a high security government building or industrial facility such as a factory. In such a future world, an alleged need for cleanliness (decon) might also be used as justification for a mass decontrabanding (including a search of personal belongings).

Initially all passengers or persons entering a "clean facility" are assumed to be potentially contaminated. Since we don't know which if any of these persons are guaranteed to be free of contaminants, everyone must undergo decon (decontrabanding and decontamination).

This involves a 2 step process:

In this exhibit of 2002 August 29th, 7pm, attendees had the option of processing through decon, although in an actual incident, military forces would be present to require all civilians to undergo decon. In this exhibit, all but one person chose to undergo decon. The one ejectee was escorted out through the back door, into the parking lot, whereas everyone else was processed through decon to attend the event.

All suspects must remove their shoes at the door, upon entry into the exhibit space. At the entrance, each suspect is given a large heavy duty clear plastic bag, called a "contrabag" (contraband bag), in which to carry their own shoes in. Additionally, each suspect is tagged with a neck-worn numbered identification tag. The suspects gather in the main exhibit hall to hear the initial address by Professor Arthur Kroker, followed by an address by Professor Derrick de Kerckhove (Director of the McLuhan Program on Culture and Technology). 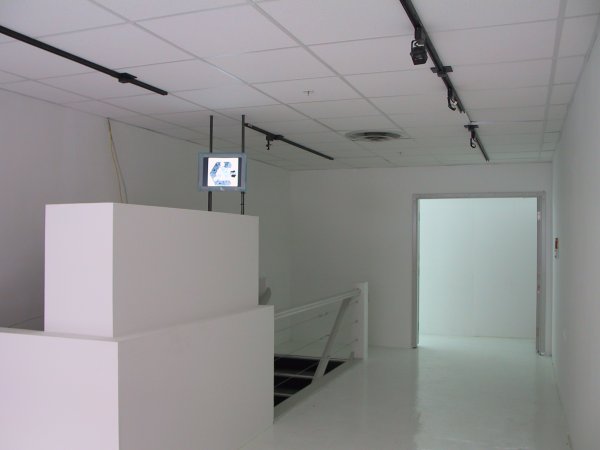 .
In this gallery there is a wooden bench that is exactly 12 feet long, upon which the 12 men are asked to seat themselves. There is a stainless steel surgical table in front of the bench. Initially a decon officer asks each person to empty his pockets onto the table to make sure that there is no obvious contraband (guns, knives, nail clippers, box cutters, etc.). Next the men are asked to remove all clothing, jewellery, and personal effects. They are each instructed to place these items into the clear plastic contrabag with their shoes. Contrabags are checked in at the bagging counter, where a bagging officer seals the bags with a tie wrap gun with a serial-numbered evidence tag. The bagging counter is illustrated below:

Notice also the body scanner rightmost in the picture. This will be explained later, and is used after the suspects return from decontamination.

The shower column is held down with stainless steel cap screws, to a cast iron base that is cemented into the floor. The cast iron base provides both the drain, as well as the supply of water. Additionally, there are various hookups such as coaxial cables, ethernet, etc., inside the hollow waterproof column.

You can take a look inside the access hatch of the column shower.

The shower is in a clean white room, having three design elements, as shown below, left-to-right:

(also fed to podium)
The blue regions indicate water flow in sectors where the computer vision system has detected a properly positioned bather. Here four bathers have been detected.

Manual override may be done with a hexagonal-shaped (de)control panel, as shown below:

The decontrol panel comprises six triangular metal plates with a triangle-shaped pushbutton switch on each one, the six triangles making up the hexagonal shape of the panel. The panel is oriented and wired so that there is a one-to-one correspondence with the six nozzles as viewed through the mirror/window. Because the decontrol room is dark, the mirror/window functions as a mirror when viewed from the shower room, and as a window when viewed from the decontrol room side. In order to protect the privacy of the decontaminees, the Chief Privacy Officer (CPO) ensures that the operator is a person of the same gender as those undergoing decontamination.

The body scanner comprises an infrared sensor array connected to a DEC Alpha supercomputer. It calculates all body dimensions, and computes the optimal design for a uniform. This information can then be used to either custom-tailor a uniform, or to select from a fixed stock of pre-made uniforms. In this exhibit, the uniforms are all pre-made, of white Tyvek (TM).

Here is a screen capture from the body scanner:

The process is very streamlined and works quickly, so that thousands of people could, in principle, be processed in such a facility, in a short period of time.

The figure below illustrates the process:

People lined up at the left proceed to be scanned, and are quickly handed a Tyvek (TM) jumpsuit in their size, and then put it on and line up at the right. The white jumpsuits have no pockets in which to conceal contraband.

The body scanner is mounted from the suspended ceiling by way of steel tubing, and all the wiring runs inside the steel tubing to give it a nice clean look, as shown below:

After the 12 men are processed, and clad in the white jumpsuits, they are led upstairs to the upper room, and out onto the roof.

When all of the men are clear from the decontrabanding gallery and decontamination gallery, there is a staff change, wherein the male decon officers are replaced with female decon officers, and then 12 women are admitted into the decontrabanding gallery. The process alternates, roughly 15 minutes for men, 15 minutes for women, and so on, until all of the attendees have processed through decon.

At this point there is a rooftop address: the keynote address (Mann) followed by an address by CAE's Steve Kurtz.

Then a wine and cheese reception took place one floor down, as the official opening of the exhibit, with informal discussion, etc..

CONCLUSION: THE NEED FOR FURTHER INQUIRY

The exhibit has hopefully raised a lot of important questions. In the wake of the anthrax attacks in the fall of 2001, this work has taken on a new relevance. Many questions remain unanswered, and need to be further explored through subsequent discussion.

Perhaps the most important as yet unanswered question is what happens when the new heroes of society are placed in such high regard that they fall outside the scope of scrutiny. Take for example the fireman. From fire extinguishers to riot extinguishers (big cans of pepper spray), the need for crowd control has been marketed as a new social order. And with fire hoses for crowd control the need for the fireman has changed from controlling fire to controlling people. As crowds of people are hosed down to prevent them from leaving the scene of a suspected white powder spill, one might ask: Is he the firefighter cum people fighter? Or has his Freudian desire to control fire merely evolved into a desire to control people?